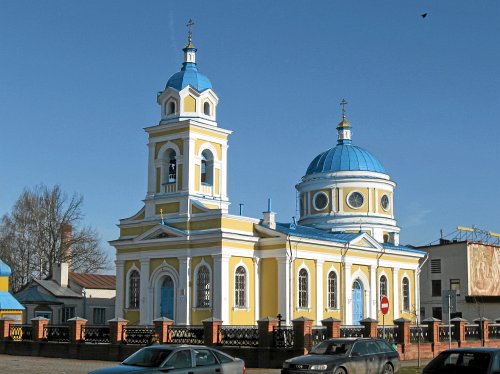 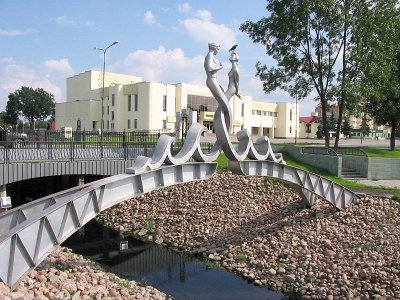 Pruzhany has been known as Dabuchyn since 1487. In the 16th century it belonged to queen Bona Sforza of Poland. She brought Renaissance influence and development of trades in this part of the Polish-Lithuanian Commonwealth. In 1589, her daughter Anna granted a town charter and the coat of arms of Pruzhany (a blue snake swallowing a baby on a silver shield). The coat of arms was borrowed from that of the Sforza family of Milan. Pruzhany was a center of pottery trade at those times. In the mid-19th century a wealthy Polish landlord Walenty Szwykowski laid out a park and built a pretentious palace that houses a museum today after a restoration. The museum has a rich collection on the history and arts of the region. Another tourist attraction is the landmark at the confluence of the Mukha River and the Vets Canal. It presents a statue of a passionate pair rising over waves.
One of the tourist attractions in today's Pruzhany is the landmark at the confluence of the Mukha River and the Vets Canal
The Jewish population in 1900 was 5,080. In 1941, the Nazis herded the Jews of Bialystok and the vicinity here to create a ghetto. In Aktion roundups on January 28–31, 1943, the Nazis deported 10,000 Jews of the Pruzhany ghetto to Auschwitz, via Birkenau, where the men, women and children were murdered.
In 2003, the central part of the town was reconstructed to prepare the town for the national harvest festival “Dozhinki” in autumn 2003.